We had the first webinar in our four part series Today.  It was a webinar on the basics of Twitter.  I will share the link to the recording of the webianr once it is available.  You can see the PowerPoint on Slideshare at this link http://www.slideshare.net/Nelightful/twitter-basic5213.

For those of you who participated in the webinar, what are some things you learned or what questions did you come away with?  Does Twitter seem useful to you for your own professional development?  Can you suggest some ways to use it with students or colleagues?

Shortly after the webinar I came across a link to an online article entitled 5 Ways To Get Better At Twitter through a post on a Linked-In group I belong to called Twitter-Using Educators.  The link to the article was posted by @JoyceHinkson, who i had mentioned in the webinar asa good person to follow. Twitter is all around us.

I particularly resonated with the part about tight crowds forming around conferences.  As they said "These structures show how networked learning communities function and how sharing and mutual support can be facilitated by social media." 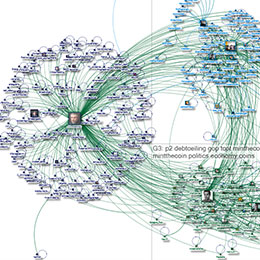 People connect to form groups on Twitter for a variety of purposes. The networks they create have identifiable contours that are shaped by the topic being discussed, the information and influencers driving the conversation, and the social network structures of the participants.

A special analysis by the Pew Research Center and the Social Media Research Foundation of thousands of Twitter conversations finds there are six distinct patterns to the conversational and social structures that take place on Twitter:

Polarized Crowds often form around political topics: If the subject is political, it is common on Twitter to see two separate, polarized crowds take shape. The participants in one group mostly do not interact with people in the other group. Those in each cluster commonly mention very different collections of website URLs and use distinct hashtags and words in their tweets. Each group centers on different influential tweeters.
Why this matters: It underscores that partisan Twitter users rely on different information sources and commonly do not interact with those on the other side on Twitter.

Tight Crowds are shared spaces of learning and passion: Many conferences, professional topics, hobby groups, and other subjects that attract likeminded communities form the shape of a Tight Crowd. There are different clusters of conversations in these networks, but people are closely tied to each other, even to those in other groups.
Why this matters: These structures show how networked learning communities function and how sharing and mutual support can be facilitated by social media.

Brand Clusters are formed around products and celebrities: When well-known products or services or popular subjects like celebrities are discussed in Twitter, there are often many comments from participants who have no connections to one another. Well-known brands and other popular subjects can attract large fragmented Twitter populations who Tweet about it but not to each other.
Why this matters: There are still institutions and topics that command mass interest but do not lead to the creation of connected conversations in a group.

Community Clusters are created around global news: Some popular topics may develop multiple smaller groups, which often form around a few hubs each with its own audience, influencers, and sources of information. Conversations in these Community Clusters look like bazaars which host multiple centers of activity. Global news stories often attract coverage from many news outlets, each with its own following.
Why this matters: Some information sources and subjects ignite multiple conversations, each cultivating its own audience and community. Community Clusters networks can reveal the diversity of opinion and perspective on a social media topic.

Broadcast Network structures are created when people re-tweet breaking news and commentary from pundits: Twitter commentary around breaking news stories and the output of well-known media outlets and pundits has a distinctive hub and spoke structure in which many people repeat what prominent news and media organizations tweet. The members of the Broadcast Network audience are often connected only to the hub news source, without connecting to one another.
Why this matters: Broadcast Network hubs are potent agenda setters and conversation starters in the new social media world. Enterprises and personalities with loyal followings can still have a large impact on the conversation.

Support Network conversations revolve around a singular source: Customer complaints for a major business are often handled by a Twitter service account that attempts to resolve and manage customer issues around their products and services. This produces a hub and spoke structure that is different from the Broadcast Network pattern. In the Support Network structure, the hub account replies-to many otherwise disconnected users, creating an outward hub. In contrast, in the Broadcast pattern, the hub gets replied to or re-tweeted by many disconnected people, creating an inward hub.
Why this matters: As government, businesses, and groups increasingly provide services and support via social media, the support network structures becomes an important benchmark for evaluating the performance of these institutions.

Link to the recorded webinar on the basics of Twitter

Below is the link to the recording of the webinar on the basics of Twitter.  We have posted it on YouTube for now but will also put it up on vimeo and maybe teachertube.  What other video sharing sites do you use?